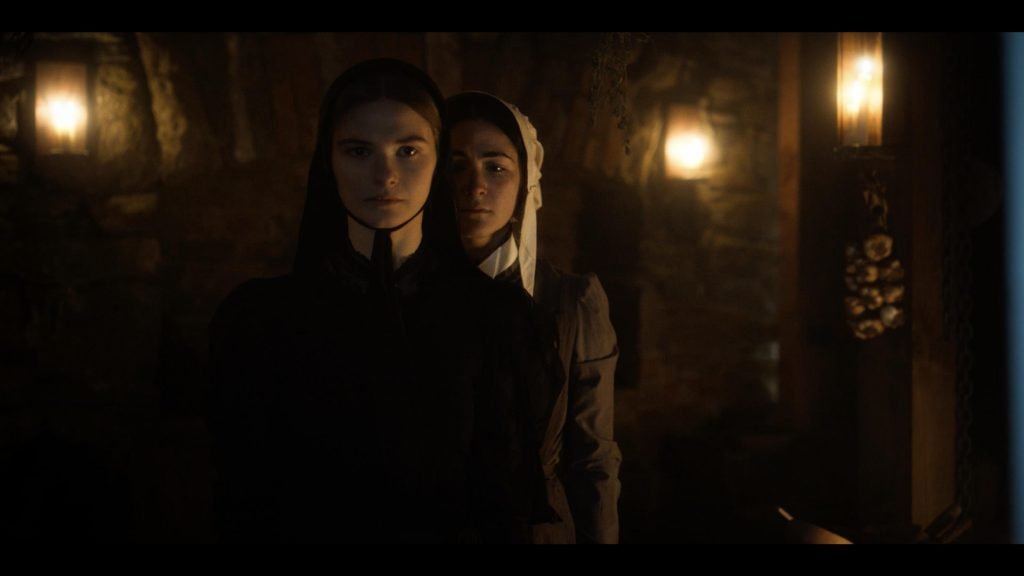 The trailer, as revealed shows that the movie is going to have layers of darkness, mystery, seduction as well as the dark side of religion. The elegant horror piece has ensembled an amazing cast as well. The poster is eerie as well. It shows a blindfolded girl with blood dripping from her eyes.

The story is a periodic drama set in 1843, Southold, New york. A family living in their old farmhouse gather to mourn the demise of their matriarch. Mary, a young woman lives in a religiously repressive household. She is defied by her family when they come to know about her romantic relationship with their maid, Eleanor. However, Mary’s family perceives the relationship as an abomination and deal with it as severely as possible. The couple tries to carry their relationship forward in secret. They also plan to go against the family members.

But mystery steps in as they hunch that someone is watching or listening to them. The horror of the film is brought out thereafter. Mary, on the other hand, is under investigation following the death of her grandmother. Mary is confronted by her family members about her behavior after her grandmother’s death. Religious fanatics target her as they predict that she might have a connection with occult forces. The tension is heightened by the arrival of a stranger and the revelation of greater forces at work. He is also referred to as ‘The Intruder’.

The polished effort of the cast is noticeable as the trailer is spooky enough to convince the viewers that the movie is off the track. As the trailer shows, the movie is set in a dark, heavy atmosphere. The haunting period tale has got the right cinematography as well. The darker shades also complement the intensity of the horror tried to be portrayed.

The lead character of Mary and Eleanor is played by Stephanie Scott and Isabelle Fuhrman. Isabelle has featured before in the horror film ‘Orphan’ and became worldwide famous for her chilling acting. Stephanie has won hearts in ‘Insidious: Chapter3’. The film also features Rory Culkin who is known for his work in ‘Castle Rock’ and ‘Materna’.

The movie will premiere on Shudder on January 20. The film found its place at the Fantasia International Film Festival in August. It was also featured at the FrightFest in London. The movie is all set to release on January 20, 2022.

The movie definitely belongs to the genre of mystery and thriller. It is said that the movie will have a runtime of 1 hour and 29 minutes. The trailer shows similarities to ‘The Witch’ and ‘Benedetta’ that have been quite successful horror releases.

Also Read :  Everything You Need To Know About Peacemaker

We’ve come across a series of periodic horror films before. As the audience has come to realize that amalgamation of horror and religion sounds sinister and uncanny itself. The filmmakers have thus rightly decided to give the viewers chills from that angle. ‘The Last Thing Mary Saw’ is a debut film for Vitaletti. He has very successfully presented a creepy trailer along with a captivating cast. It is only a days’ wait to find out what we have yet to explore.