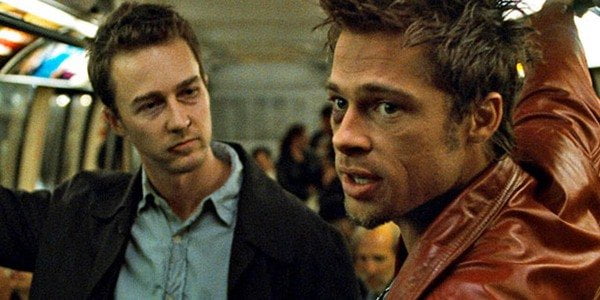 Apparently, today we break the first rule of Fight Club by talking about it! The film is and will be enjoyed by generations to come. There is a particular analogy that surrounds FIGHT CLUB but has its roots sucking its waters from YOUR HOUSEHOLD.

Fincher’s fight club arrived more than two decades ago setting a cult status so high that even after two decades it seems as potent as ever. If you have not seen the movie, first of all WHY? What are you doing? secondly, do not read further, SPOILERS AHEAD!

The film came with the biggest turn of the century when a mad man driven by a fragment of his own imagination showed a mirror to the world that left heads hung on their necks and their jaws dropped on the floor. The pursuit of man’s sheer barbarian instinct, his bloodlust and his approach to extremism flows out of the reel perfectly. However, the analogy behind the film’s characters and the story derives it’s roots from the common man’s household. The dichotomy of the topic intensifies when the audience relates more with the antagonist.

Also Read :  F9 Trailer shows action in the space: And some similar faces

With this in mind, Let’s break it down piece by piece.

Fincher as a director perfectly befits the Technician’s archetype with ample of masterful tricks up his sleeve. The film’s camera movements accelerate as Cornelius descends into his “Pitt” of madness. The colors of the film are pale and lifeless and sustain a trance of lifeless uniformity, describing Cornelius’s life perfectly while Tyler’s flamboyance puts him in spotlight without question. But the biggest trick Fincher pulled off flawlessly is breaking the 4th wall. The impact of Cornelius’s words seem to be at it’s peak when he talks directly to the audience as if he is asking them a question, really incepting the seeds of his circumstances deep into the audience’s minds.

The film deals with the internal affairs of the mind explicitly dragged into the physical world.

The monotony of regular life, which is basically what makes it lifeless and dull is the reason the characters turn on their specific arcs.

Fincher loves to leave hints in between the films so that when the conclusion arrives it hits the minds of the viewers like the hammer nailing the last nail in the coffin.

Fincher’s peculiar films generally include a self driven character who in his despise of a common life drives himself to mayhem and then becoming the Deus Ex Machina who tries to reverse it.

Perhaps, the most underrated character in the film is Marla Singer. The suicidal drug addict who is the salvation and the rehab to Tyler and Cornelius. Marla appears at every significant turn of the film and even at last Tyler demands to see her as they watch the financial world turn to ashes. The same Marla who invaded the ice cave and the friendship of the narrator and his alter ego.

Marla is undoubtedly a key to something that lies beneath inches of a complex thick black mass in the head of Cornelius.

In simple words, she was the wife of Cornelius and suddenly his life had changed when he had to share his cave with someone else. He mentioned how they were lovers at night and strangers by the day who could not stand each other in the same room. Devoid of his freedom clumped into his pathetic life Cornelius discovers the duality of his mind and the society which he is a bi-product of. The loving of the night turns to loathing of the day because the lives that are led in the brightest hours seem the darkest parts of society now. The friction of Cornelius’s thoughts gave birth to Tyler who could not only satisfy his wife but also lead a life that had a purpose, a belonging. Who could be the messiah that his mind was so explicitly looking for.

“BECAUSE YOU & ME ARE THE SAME PEOPLE”