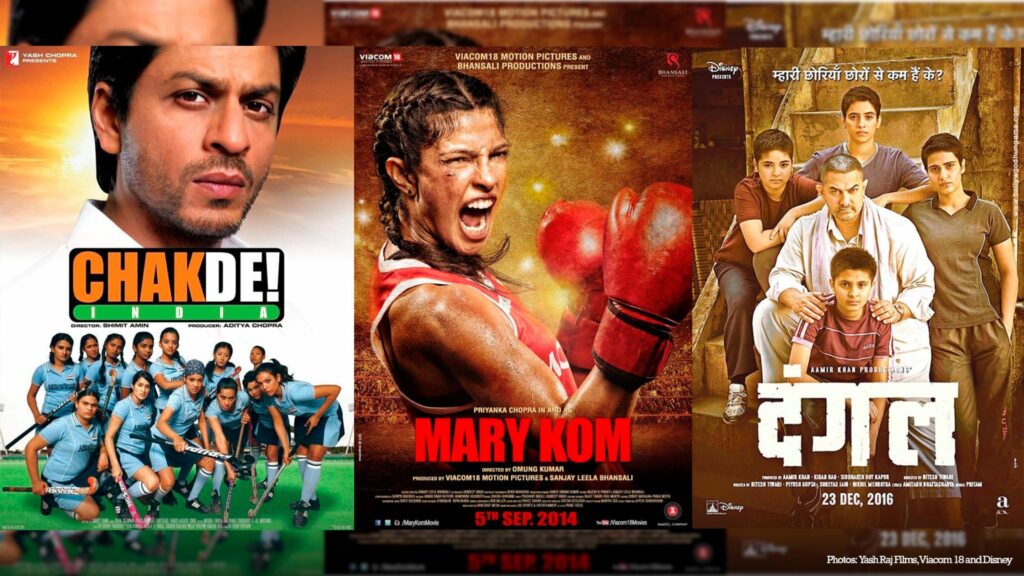 India is a medal machine during the Commonwealth Games. Many outstanding athletes have outperformed the competition with their superior abilities. No matter if it’s P.V. Sindhu playing badminton or Lovely Choubey, Pinki, Nayanmoni Saikia, or Rupa Rani Tirkey playing in the first-ever Lawn Bowls Women’s Fours. Sports are among the activities that unite the nation. It is likely the only other genre in movies that can keep you on the edge of your seat while knowing what will happen. The sportsmanship is still present now that the Commonwealth has ended, and some of the best and greatest sports drama movies are listed below.

After India’s women’s hockey team lost to Pakistan in a match, Kabir Khan was labelled a traitor and disappeared for years. Seven years later, he reappeared to accept the position of coach, which the association deemed useless. Kabir is in charge of a sixteen-person team that is split into competitive, district, and seniority divisions. But Kabir’s goal is for us to play for India instead of any of these. The squad wants to fire him because of his severe discipline and hard coaching methods, so he finally resigns. During Kabir’s farewell, the women fight with the males who are trying to pick on the team and insult them, and Kabir notices his team’s cohesion.

The film then tells the story of her initial training, her struggle with a new sport, her extreme dedication and willpower, and her passion. While also demonstrating the extreme difficulty of juggling the needs of home and boxing. As well as the additional sacrifices she had to make in order to pay for her classes and equipment. All of this is done in the context of the poverty that was a constant in her early life. The narrative depicts the nation’s dismissal of her as well as the pressures placed on her and her family to leave. Then it is demonstrated how she makes a return, receives recognition, and looks after her family and kids while doing so.

Also Read :  How to Watch the 'Hellraiser' Movies in Order, Release Date

Football is the only thing in Jess Bhamra’s life that she truly loves. She imagines herself as a successful soccer player, and David Beckham is her idol. As soon as she does, she befriends Juliette Paxton, or Jules to her friends, and she joins a girls’ team led by the fairly attractive Joe. She is a member of a traditional, loving, and close-knit Sikh family. Although Jess’ obsession with sports doesn’t fit into her parents’ ideal of a young woman’s future. As her parents just want the best for both of their daughters. When they both develop an ardent interest in Joe, Jess and Jules argue.

The reason being, she doesn’t feel comfortable moving in the shadows. Jess must choose between supporting her family and her friends because her sister’s wedding is the same day as the football championship. There a US College scout will be in attendance to evaluate her performance.

In North India, a small community is experiencing drought conditions sometime in the second half of the 19th century. The British captain of the neighbouring cantonment, Captain Andrew Russell, demands from the villagers twice as much in land tax (lagaan) as is customary. After three months, when the villagers’ representatives visit Captain Russell to address the situation, he challenges them to a cricket match against his squad. The challenge is accepted by a young peasant named Bhuvan. He then begins to assemble his group of neighbours for the confrontation with their colonial overlords. Lagaan is totally fictional sports drama movie, story revolves around a small village farmers in India.

Former wrestling champion Mahavir Singh Phogat was forced to give up the sport by his family. Since it wasn’t providing for them financially. He just hopes that his son will win a wrestling gold medal for India. Despite the fact that he has four daughters back to back. While Geeta and Babita are growing, Mahavir notices that they have the potential to be wrestlers and begins training them. Geeta and Babita must undergo a rigorous training regimen and initially resent their father for doing so. But they eventually come to understand that their father is acting for their benefit and take the sport seriously. She wins Junior International and quickly gains notoriety as a wrestler in the state.

Geeta also has to travel to Patiala for more training so she may compete in the common wealth games with her new coach Pramod Kadam. Babita is also becoming well-known at the junior level. Geeta thinks her coach trained her better than her father, which depresses Mahavir greatly.

Participants from three different schools—Rajput for the wealthy, St. Xavier’s for the less affluent, and Model School for the underprivileged. They come together once a year to compete in an exhilarating cycling race. Shekhar Malhotra of Rajput and Ratanlal Sharma of Model are the two key runners-up. As Shekhar has a winning streak for Rajput and Ratanlal hasn’t, Ratanlal needs to defeat Shekhar to claim second place. However, as the competition draws nearer, Ratanlal and Shekhar start to have personal disagreements. These disagreements eventually escalate into violent arguments, leaving Ratanlal seriously hurt and unable to compete. Sanjaylal, the younger, reckless brother of Ratanlal, is prepared to give his brother a surprise of a lifetime, nevertheless.

The movie tells Milkha Singh’s life story from the time he was a young child who lost his family during the partition of India and Pakistan to his ascent to the position of sprinter who represents India at numerous international sporting competitions and brings home several medals for the nation.
The story is presented in two tracks. One story of Milkha’s career includes his enlistment in the Indian army, where he is inspired to serve his country. His detailed childhood tale, his relationship with his older sister Isri Kaur. Also, his teenage infatuation are all condensed in the second track. Such non-linear storytelling generally involves the two parallel lines crossing.

Goalkeeper Mahendra Singh Dhoni plays for the school football squad. A school cricket coach named Bannerjee encourages him to join his team and practise with him every day for two hours. As time goes on, he develops into a major state-level cricketer, but for a very long time, his luck hasn’t been in his favour to join the Indian Cricket team. After working for Indian Railways for four years as a ticket checker and playing cricket for the railroads, Dhoni is finally chosen for the national team and goes on to become one of the greatest cricket captains in the sport’s history.

March 1983 The Indian cricket team is chosen to compete in the third world cup, which will take place in England in June, but no one has high hopes for the group, and team administrators are dissatisfied with the choice of Kapil Dev as captain instead of Sunil Gavaskar. The Indian cricket team has a strong start at the world cup, winning their first two games against the formidable West Indies and Zimbabwe, but after losing their next two games to the West Indies and Australia, they are in a fight for their lives against Zimbabwe to advance. With the score at 17 runs for 5 wickets in the crucial match against Zimbabwe, half of the team has already returned to the pavilion.

By scoring well for the team and keeping their dreams alive in the competition, Kapil Dev performs the role of a one-man show. The squad’s spirit also advances them to the final at Lords where they will face the two-time world champion giants West Indies. Only because of the faith of one man, Kapil Dev, does a team that was not viewed as deserving make history.

Saand Ki Aankh is based on the experiences of sisters-in-law Chandro and Prakashi Tomar, who began shooting in their 60s and have since won numerous medals. The Shooter Daadis of Uttar Pradesh’s Johri village, who are now in their 80s, have punctured glass ceilings with bullet holes and opened doors for more women to leave their homes in a region known for violence and gender discrimination, including Prakashi’s daughter Seema, an international champion in the sport.