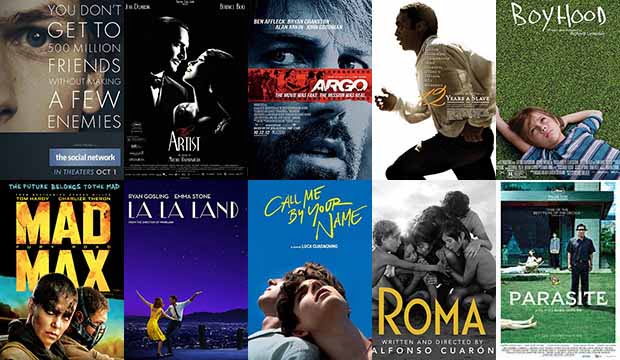 Some Of The Best Films Of The Decade

Cinema has emerged immensely in the last decade. From the start of the decade with the outstanding film, Inception and the Social Network to give chills to the audience with Gone Girl and Whiplash, films are seen with a deep state of excitement and admiration. Be it the rise of Marvel Universe or a renewed franchise of Star Wars with great dominance of the animation world. However, nothing can hide the fact that this decade has produced a great number of films, resulting in easier and cheaper to make. But that does not mean that the films were not good. There are more than a hundred films that were considered the best films of the decade.

Following are some of the best films of the decade.

Moonlight follows the life of young Chiron, an African American into three different chapters. The boy lives in a rough neighborhood in Miami. He gets bullied at an early age, gets seemingly outcasted that makes him realize that he does not fit in this society because of his sexuality. Consequently, the boy gets more silent and isolated from everyone. His home life deteriorates when his mother descends into the intake of drugs. Chiron finds a refugee in a drug dealer, Juan who leaves lasting effects on the directions of this young boy’s life.

The film is a coming-of-age masterpiece by Barry Jenkins dealing with young people facing the harsh realities of life. The pastel color palette has complimented the script along with the talented cast.

In the year 2060, years after the downfall, Mad Max decides to wander alone on his journey. But he digs out with a group fleeing across Westland in a Rig War led by elite Imperator, Furiosa. The two rebels might be able to restore the road. Furiosa with her five other captives, known as Five Wives. The Warlords escaping the Citadel pursues the rebels ruthlessly in the road of war.

Christine aka Lady Bird, is a rebellious student of Catholic School, living in a small town in America. The girl aspires to study Arts in New York. She lives with her father, brother and his girlfriend, and her over-protective mother who works as a nurse. The journey follows with her day-to-day thoughts, along with her circle of friends and her uninteresting choices of boyfriends.

Directed by Greta Gerwig, Lady Bird throws light on parenting, struggles of middle-class families that include money. The film showcases the situation of adjustments in life, where one never really gets what they want. The theme closely focuses on the moving world around us and the space we make for people who love us.

A Harvard undergrad with genius computer knowledge, Mark Zukerberg works on a social concept in the year 2003. Hence, the research results in forming a global social network called Facebook. After the successful six years, Zuckerberg’s successful life comes to halt when he finds himself stuck into professional as well as personal complications. He ends up getting two lawsuits against his company and one of them from his former friend, Euardo Saverin.

David Fincher’s The Social Network is based on the book ” The Accidental Billionaires” which shows the formation of one of the biggest social media platforms, Facebook. The film involves a wide range of themes such as hubris, friendship, jealousy, ambition, success as status, and revenge. The plot of the film explores the world where people become friends or unfriends with a click of a mouse with perfectly balancing characters and intertwining narrative arcs.

An ambitious young jazz drummer, Andrew Neiman trails the path of hard work in order to rise at the top of his elite music conservatory. Neiman gets discovered by the instructor who is known for his terrifying teaching methods, Terence Fletcher who transforms the boy into one of the best jazz ensembles. However, Andrew’s life changes forever when his passion changes into his obsession when Fletcher pushes him off the edge for it.

Apart from being a jazz-like film, Damien Chazelle’s Whiplash shows the mental torture of pursuing power and excellence. It portrays the dominance of obsession and one’s submission to it. The powerful performance of the two main characters makes it hard for the viewer to take eyes off the film.