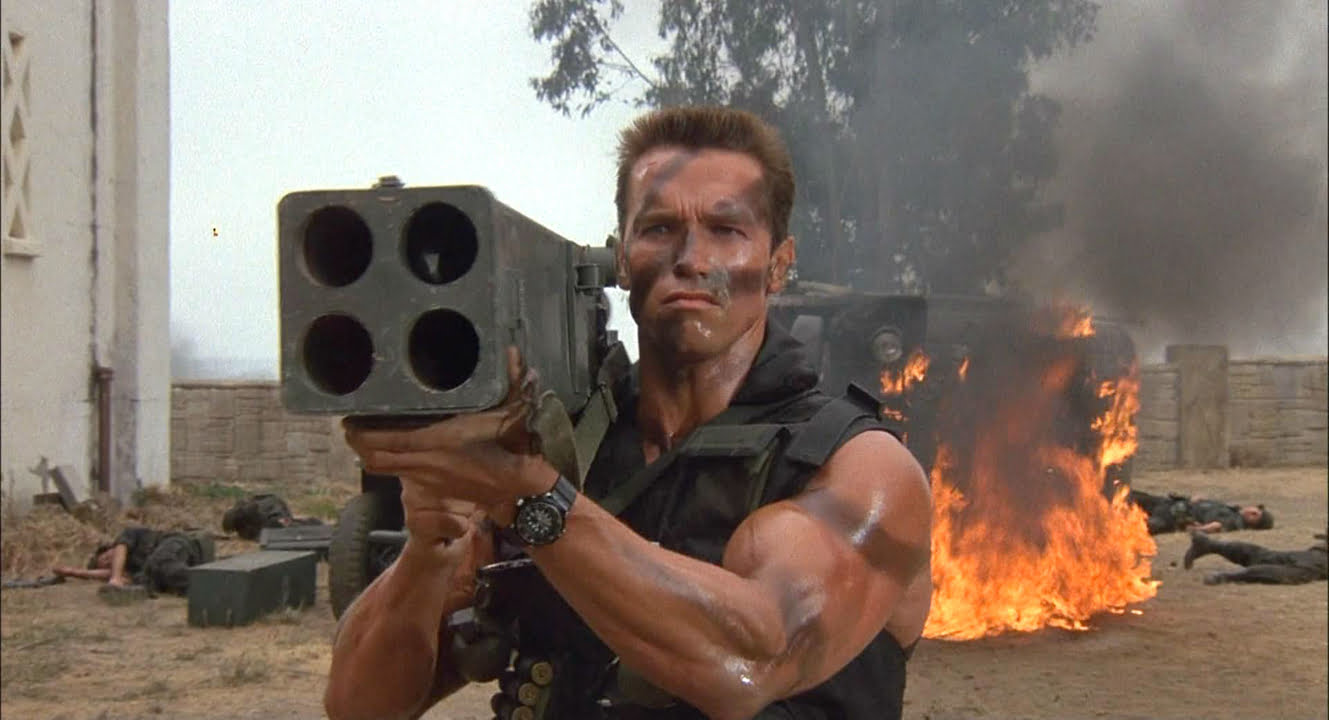 If one guy could be said to embody action movies, it would be someone whose surname has become synonymous with the genre. Arnold Schwarzenegger made a name for himself on the big screen in the 1980s and 1990s with his distinct action flair. His films influenced mainstream culture and modern action stars such as Vin Diesel and Dwayne Johnson‘s careers. His one-liners have become legendary, rivalled only by his battles with invincible aliens and killer robots.
He is the true final action hero, without a doubt. He’s slain everything. The following is a list of his favourite action films.

The unstoppable cyborg-assassin known as the “Terminator” is sent back from a dismal 2029. There the cold machines have controlled the whole world—to 1984 Los Angeles to begin his merciless mission to kill humanity’s most important woman. The unsuspecting Sarah Connor. However, a battle-scarred defender—Kyle Reese, a courageous member of the human Resistance Army—arrives from the same war-torn post-apocalyptic future. The hell-bent on stopping the cybernetic murderer from murdering the world’s final chance. The Terminator, on the other hand, has no feelings, doesn’t sleep, and, most importantly, won’t stop until he completes his dreadful mission.

Major Alan “Dutch” Schaefer is the battle-hardened leader of an elite military unit. His hand-picked soldiers begin deploying to the region as an unexplained interplanetary spaceship breaches the Earth’s atmosphere. It is landing somewhere in the dense jungle of Central America. This ordinary rescue attempt soon turns into a slaughter, as horrific discoveries of ritualistically mutilated remains can only indicate one thing. Someone, or better yet, something, is hunting them down for amusement. Now, outmanned and outgunned, Dutch must collect the strength to make a last stand against the merciless, highly advanced extraterrestrial hunter. The major’s crude weapons, on the other hand, are no match for the humanoid creature’s cutting-edge arsenal.

After his mother, Sarah, is taken to a mental facility. A now ten-year-old John Connor finds himself in foster care in 1995, a long decade after the Terminator’s abort assassination mission in The Terminator (1984). Skynet, the self-aware computer system, sends another cybernetic assassin, this time a nearly indestructible. A shape-shifting killer, to prevent John from changing the course of history. Hence, becoming the leader of the human Resistance Army. In the face of impending nuclear Armageddon, two deadly cyborgs. The archaic but lethal T-800 and the far better liquid-metal T-1000—are pursuing the same defenceless prey.

2017 is the year. The global economy has imploded. The United States has closed its borders and transformed into a military-run police state that regulates television, movies, art, books, communication, and censorship. Criminals have a choice in the police state that America has become. They have the option of serving their time in prison or participating in “The Running Man”. A government-sponsored a violent game show in which participants fleeing for their lives are following by “Stalkers,” wrestler-like bounty hunters. “The Running Man” is the most popular show on network television, and its creator and host, Damon Killian, is the most popular entertainment in the United States.

One man, though, has yet to take the field. Ben Richards is a former Los Angeles police officer who was blame for the slaughter of innocent people after disobeying orders. He has recapture after escaping from prison. Ben, together with resistance members William Laughlin and Harold Weiss and Amber Mendez, are force to appear on “The Running Man”. There, they are pursue by The Stalkers as they search for the resistance’s secret base. In order to broadcast the truth about the government and prove Ben’s innocence.

Douglas Quaid, a regular construction worker, is plagued by vivid and frightening visions of a colonised Mars, and he has an irrepressible yearning to visit the unknown and distant red planet. Quaid enlists the help of Rekall Inc., a memory-implant corporation, to acquire a cheap alternative: the recall of the perfect virtual vacation, in order to understand his reoccurring nightmares. Instead, the operation backfires, and Quaid’s “reality” vanishes. Someone has now placed a target on his back, and bullets have begun to fly. In Mars, Quaid will find the answers he seeks.

Conan, the orphaned young Cimmerian, is condemned to a life of slavery beyond the mists of time, having witnessed the terrible death of his blacksmith father and the killing of the entire village by the merciless followers of Thulsa Doom, the undead wicked wizard and servant of the serpent-god, Set. Conan, now an unstoppable mountain of muscle, develops into a man while chained to the eternal Wheel of Pain. After years of intense training as a furious gladiator, Conan, now an unstoppable mountain of muscle, regains his treasured freedom. Conan, however, partners up with Subotai, the Hyrkanian robber, and Valeria, the Queen of the Bandits, and starts on a perilous expedition to the fabled Mountain of Power and the impregnable Snake Cult Temple, with the vision of the blood-soaked raid seared in his consciousness.

John Matrix, a retired special agent who led an exclusive team and now lives in an isolated mountain home with his daughter Jenny, has quit the military. However, when his daughter gets kidnap by a gang of thugs seeking vengeance, he is compell to come out of retirement! Matrix has no idea that members of his former team are being murder one by one. Despite the fact that Matrix’ buddy General Franklin Kirby provides him with armed security, Matrix and Jenny gets kidnap.

Matrix discovers that Bennett, a former member of his Matrix’ unit who was thought to be dead, has kidnapped him in order to coerce Matrix to carry out a political killing for a man named Arius. A warlord who was once defeated by Matrix and now wants to launch a military coup in his homeland. Matrix hesitantly accepts Arius’ demand, knowing that if he refuses, Jenny will be slain.

Also Read :  Comedies So Dry You Forgot To Laugh From 'The Player' To 'I Care A Lot'

Harry Tasker, a secret agent, has been happily married for many years to his wife, Helen, a legal secretary, and they have a teenage daughter, Dana. Helen has no suspicions that Harry is a double agent and believes he works as a computer salesman. After a top-secret operation, Harry discovers proof that Helen is having an affair with Simon, a used car salesman who captivated Helen with the glitz and glam of his fictitious life while claiming to be a spy. Harry orders his associate Albert Gibson to utilise their agency’s resources to track down Simon and Helen; they capture Helen while wearing masks and later assign her to a fictitious job. Helen and Harry are kidnapped by terrorists, and the couple becomes entangled with a hazardous group that has an atomic weapon ready to be detonated in Florida.

Living off the grid ten long and difficult years after his encounter with the liquid-metal killer in Terminator 2: Judgment Day (1991), John Connor, a strong survivor and now-23-year-old wanderer, understands that these are dark and unpredictable times. For the third time, the self-aware computer network Skynet dispatches another cyborg assassin—this time, the gynoid-like T-X, its most efficient and technologically perfect model; but, the Resistance has dispatched a protector: the reprogrammed but long-obsolete T-101. The future is hanging on a thread once more, and it’s either us or the chilly robots this time.

Danny Madigan, an eleven-year-old film enthusiast who is addicted to the fast-paced, high-octane world of fictional, no-nonsense Los Angeles cop Jack Slater, played by his favourite idol, Arnold Schwarzenegger, can’t wait to witness a special preview of Slater’s latest picture. Young Danny will soon become a part of the story, living and breathing inside a glossy celluloid world filled with high-speed car chases, magnificent explosions, surreally good-looking women, ruthless Sicilian mobsters, and murderous henchmen, thanks to his projectionist friend Nick and Harry Houdini’s magical golden ticket. When a smidgeon of reality enters the fantasy realm, and vice versa, the indestructible Jack Slater finds himself up against equally indestructible arch-enemies in a world he scarcely recognises.