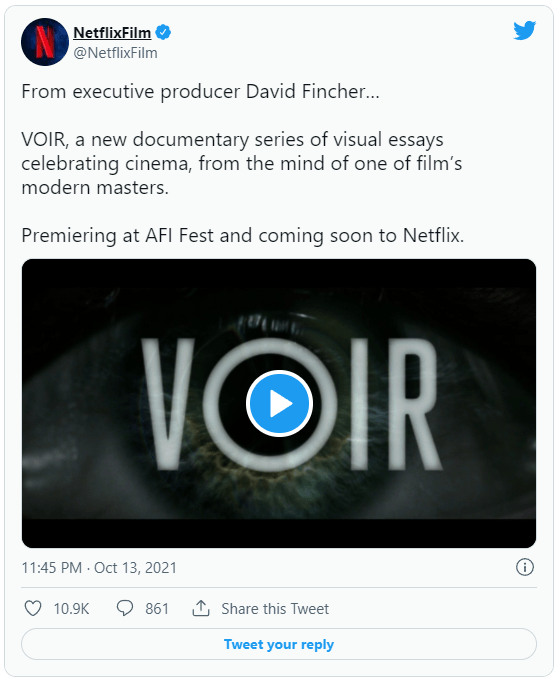 Netflix had teased the fans with a peculiarly intriguing tweet recently. It hinted on a new announcement by the acclaimed director David Fincher. Fans, leaving no stone unturned, formulated millions of answers. Some took the adrenaline rush and speculated the 3rd season of Mindhunter. Others had a notion that it was time for the sequel of ‘Fight Club”. However, the result was a pretty big surprise.

Netflix and Mindhunter director David Fincher are collaborating on a new docuseries. Titled “Voir”, which will feature a variety of visual studies in the honor of cinema.

The recently unveiled project really is something different. It’s unclear what to anticipate from Voir. Based on the teaser trailer and description, but it’ll premiere at AFI Fest before reaching Netflix in the near future.

Also Read :  These 5 Ben Stiller Movies will make you laugh your guts out

What We Know So Far

The series’ brief summary states, “VOIR, a new documentary series of visual essays honoring cinema from the mind of one of film’s modern masters.” There is some whistling and the sound of a spinning film reel in the teaser, but the only clear picture is the series’ logo in front of an up-close human eye. So there was not much to go on here.

Fincher is much highly regarded for his work on the Netflix shows Mindhunter and House of Cards, as well as films including The Curious Case of Benjamin Button, The Social Network, and the 1999 cult hit Fight Club. Voir is executive produced by Fincher and David Prior, who directed “The Empty Man”, a supernatural horror film due out in 2020.

Also Read :  Films Like The Eternal Sunshine Of The Spotless Mind