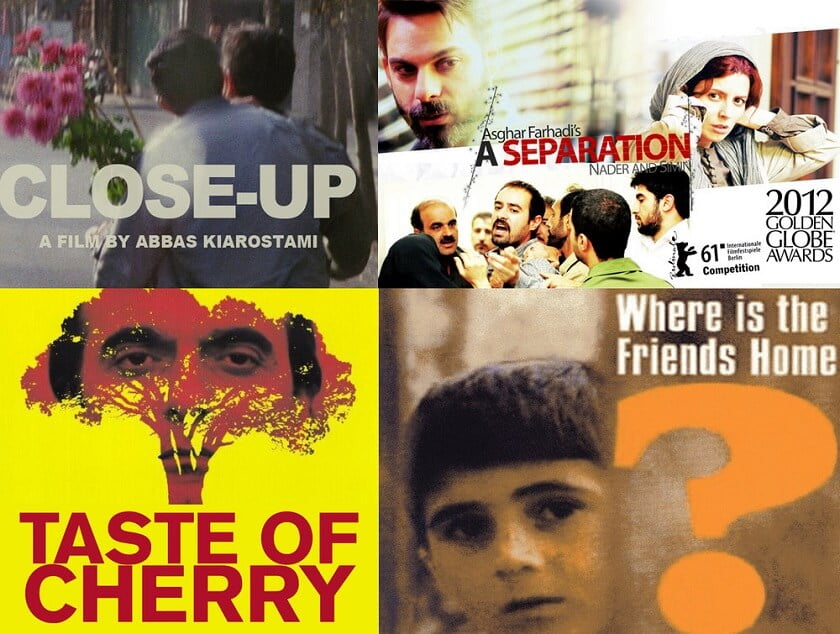 Must- Watch Films From Iran

Films are the best approach to know about the culture of different countries and religions. When mainstream cinema tries to represent certain cultures in their films, they tend to make it more centric or stereotypical. Just like this, the representation of Iran culture in world cinema is very less and has never been shown correctly. Therefore, Iranian films are the best way to understand them.

Below are some Iranian films that are must-watch for you.

Ahmed, a grade school student, watches as his teacher chastises Mohammed, a fellow student, for neglecting to utilize his notebook for homework on multiple occasions, threatening expulsion if the behavior continues. When Ahmed gets home, he learns he’s stolen Mohammed’s notebook by mistake. He goes out to find Mohammed’s residence against his mother’s orders, but he runs into false leads, dead ends, and distractions while attempting to recruit grownups in his hunt.

Also Read :  Films Which Are Extremely Disturbing But Brilliant

Simin and Nader dispute over living abroad. Simin desires to live overseas in order to provide better possibilities for Termeh, their only child. Nader, on the other hand, refuses to go because he believes he must stay in Iran to care for his Alzheimer’s-affected father. Simin, on the other hand, is dead set on getting a divorce and fleeing the country with her daughter.

While shopping for groceries, Ali is requested to mend his sister’s ruined sneakers. They are taken by a garbage truck, and a guilt-ridden Ali offers to share his shoes with her. As a result, Zohra ends up wearing his shoes to morning school. Then racing back to put them on for afternoon school. He even gives her a pen that he won from his teacher for coming first in his class to appease her. The family is struggling to make ends meet with the birth of their third kid. Their father, who is behind on his rent, works in the garden and wants Ali to learn how to do it. With the economy worsening, it’ll only be a matter of time before Ali’s shoes are worn out. Also raises the question of what the kids will wear to school then.

Mohammad, a student at Tehran’s blind institute, waits for his father to come to pick him up for summer vacation. While waiting, he notices that a baby bird has fallen from its nest: he chases a cat away, locates the bird, climbs a tree, and returns it to its nest. Finally, his father arrives and transports him to their town, where his sisters and grandmother await him. The young guy is a devout student of nature who yearns for village life with his family, but his father is ashamed of him and wants to farm him out so that he can marry a lady who knows nothing about him. Dad apprentices Mohammad to a blind carpenter far from home, over granny’s protests.

Following the forced evacuation of their apartment in a condemned building in Tehran, Emad and Rana relocate to a small flat set against the backdrop of Arthur Miller’s Death of a Salesman (1985). Then catastrophe strikes when Emad decides to stay late for a rehearsal, leaving Rana alone at home. The couple’s faith and love, the very bond that holds it all together, will be put to the test during the next two weeks, in the aftermath of that dreadful night. Rana’s existence is now characterized by terror, while Emad is burdened by an intolerable sense of shame, and the theatrical performance must go on at all costs.

Also Read :  Series To Watch If You Liked Witcher Season 2

Hamid Hamoun, a middle-class man, has been married to Mahshid, a painter, for seven years. However, Mahshid is becoming increasingly irritated by their presence, believing that Hamid is preventing her from expressing her genuine talent. In addition to his battle to finish his Ph.D., Hamid struggles to come to terms with her request for a divorce. Hamid tries to piece together what went wrong in a succession of dream sequences that recall Fellini’s work.