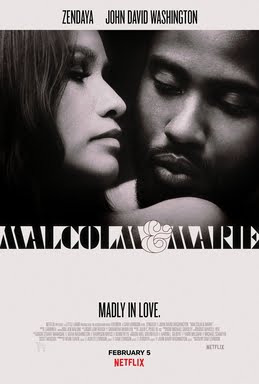 Malcolm And Marie On Netflix Review

Starring Zendaya and John David Washington, Malcolm, and Marie revolve around a Hollywood couple argument yielded over Marie’s disappointment on Malcolm for not thanking her in his film premiere speech.

Hollywood couple, Malcolm and Marie come from Malcolm’s successful premiere night of his film Imani. Malcolm has worked in the film industry for years now but yet he has not made something he was proud of. Finally, with his film Imani, Malcolm has felt that sense of validation. As soon as the couple arrives at their Malibu house, provided by the production company, Malcolm is singing, dancing, and drinking on the songs of James Brown. Along with it, he is ranting about readings of critics of his work from the ground, to his criticizing critics’ way of putting racial and political context into his art.

On the other hand, is Marie, is simmering and drinking. She’s been here before, have heard about it all. Momentarily, Marie expresses her feeling which is making her upset. They’ve been together for more than five years and Malcolm made a film that was partially based on her past. However, consequently, Malcolm did not even bother to give credit to Marie in his thanking speech.

Thus, the film leads to long-night series of arguments between the couple about their relationship and Malcolm’s film.

Filmed in 35mm black and white, the film throws at the point of void where art meets life. The film shows the rarely seen reality that happens behind a closed door. Levinson has portrayed the point-of-realization of how the two have misused each other. Every scream, eye roll, anger, and desire is loud. Between their arguments, lies their pieces of affection with Duke Ellington’s song, “In a Sentimental Mood”, complimenting their situation. The story has built interesting by giving fragments of the couple’s past together as well as, as an individual. From time to time, the agreements are interrupted by moments of understanding and making love sessions.

CHARACTER ANALYSIS AND THEIR RELATIONSHIP

Played by John David Washington, Malcolm is a self-centric man who tends to make everything about himself. He is a conversationalist and knows the art of manipulation of proving himself right and portray people as small. Malcolm comes from a background where his parents are together and doing respectable jobs, also his sister. He is well educated from a respectable college. But in the part of playing as a partner, he is a loser. He is a pompous sod who hates when his partner does not support him at what he does. Whether he makes a film about his partner’s past and does not bother to give her credits. Even when his film’s review dropped and everyone called it a masterpiece, Malcolm still decided to refuse those, just because it was reviewed by a “white” lady.

Played by Zendaya, Marie is a troubled actress with dysfunctional addiction problems at the age of 20, before meeting Malcolm. But she sticks to Malcolm even after him being emotionally distressed because she is thankful to him for being with her at her lowest. But in spite of that, Marie chose to show Malcolm the reality of his hurtful actions. She is a strong woman who does not need Malcolm, but still, she is by his side for how he handled her when she into well. She calls for him out every time he starts being a jerk.

Both Malcolm and Marie have a tempestuous relationship. Not only with each other but also with themselves. Malcolm being a self-centered male takes up all air in the room while Marie listens and suffocates in that room. She is a drug addict with insecurities filled in her. He is a filmmaker who throws his insecurities on her with emotional abuse. Released and shot in lockdown itself, the film also portrays the real-life situation of couples have suffered in that period.

The film clearly portrays how two can go a long way. The show goes for 105 minutes long, showing the anger on both sides, concluding nothing coming out of it. The music played a major role in the film showcasing each element of the argument and make-up conversations. The repetitive arguments after every short period of time showed the common cycle of all toxic relationships. The end of the film showed the stress of Malcolm of not finding Marie, his tragic flaw of losing Marie.