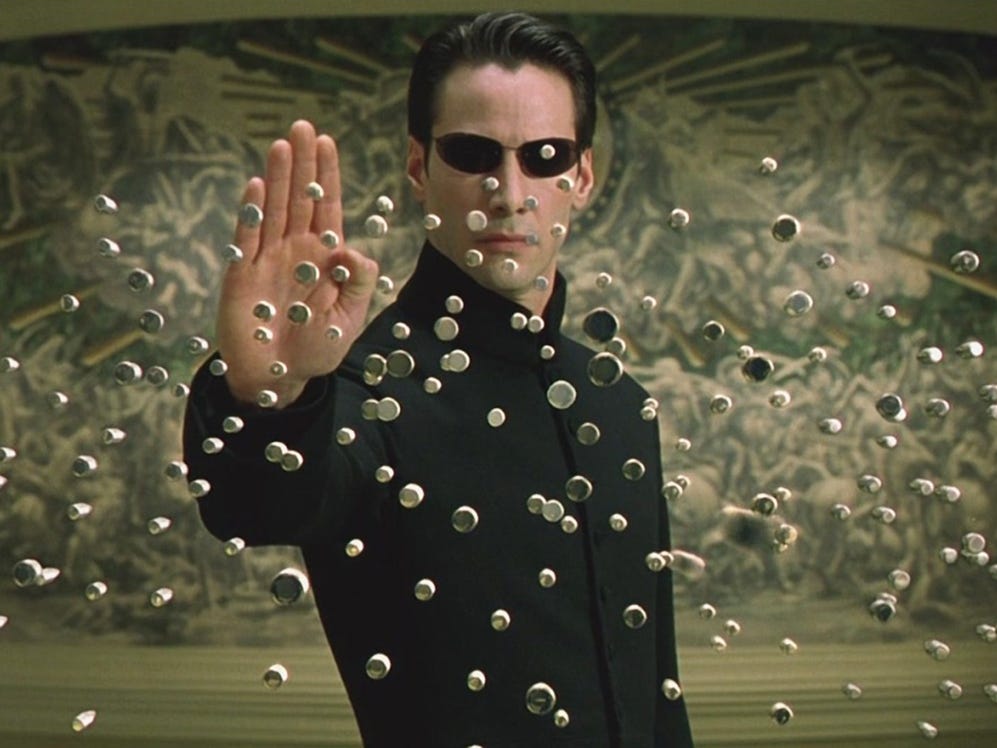 The Matrix was pioneering in many ways, employing cyberpunk and science fiction tropes to raise issues regarding the nature of society and human awareness. The saga is now continuing in The Matrix Resurrections, and the new film is just as caustic and biting as its predecessor. Here are some movies like The Matrix with excellent scientific justifications and philosophies for individuals who really like that film.

The New York Maximum Security Penitentiary, which houses inmates serving life sentences for crimes. It was built in 1997 and is now located in Manhattan. Hauk, the prison dean, offers a bargain to Snake Plissken, the condemned one-eyed bank robber. After the Air Force One carrying the president of the United States crashes in Manhattan. On the way to a conference with other leaders. He’ll be given a pardon if he saves the president and his tape in fewer than 23 hours. Snake Plissken is lured, and Hauk injects a fatal capsule into his blood. It will dissolve at the appointed moment in order to ensure his complete cooperation. Snake Plissken flies a little plane up to the World Trade Center’s roof and lands there.

Rick Deckard is a grizzled former Blade Runner. He is called out of retirement. When four rogue Nexus-6 replicants hijack a spaceship and visit Earth illegally in search of their creator. Dr. Eldon Tyrell, amid a dystopian Los Angeles of towering buildings in 2019. Deckard, a ruthless bounty hunter, searches every inch of the futuristic, neon-lit metropolis. In an effort to find the hazardous androids and “retire” them as their desire to find him grows. However, Rick is battling contradictory feelings more and more of the time.

Also Read :  Superhero Films that are not created by Marvel / DC

Kevin Flynn, a creative computer engineer, is marginalised, his labour stolen from the ruthless boss Ed Dillinger. Now, he is sacked from the powerful ENCOM firm. He has no choice but to use his free time to gather proof of theft. Flynn’s digitised alter ego will unintentionally find himself transferred into an other electronic reality. A place where oppressed small-scale programmes are compelled to compete with each other or face extinction up against an ever-watching master control programme, the MCP.

The Running Man, a game show where captives must flee to safety to avoid a cruel execution, is the nation of America’s preferred television programme in the year 2019 when the country has gone totalitarian. Ben Richards, who is currently behind bars after being used as a scapegoat by the government, has the chance to be a competitor on the fatal show and therefore find his way back to the outside world, but the show’s evil presenter, Damon Killian, has no interest in allowing him to do so.

The Pre-Crime Division, founded by Lamar Burgess, has successfully reduced the murder rate to zero thanks to its amazing capacity for anticipating and, as a result, stopping crimes before they can happen. However, of all people, Burgess’ right-hand man, Captain John Anderton, seems to be a pre-criminal. This is despite the fact that there hasn’t been a single crime in 2054 Washington, DC for the past six years thanks to the indispensable Pre-cognitives, a trio of humans with keen extrasensory abilities held in government custody. Detective Anderton must use every trick in the book to prove his innocence and clean his name because he is currently on the run from the authorities for a murder that he has not yet committed but will in less than 36 hours. But there is no such thing as an error in Burgess’ cutting-edge technology.

In the year 2027, when there haven’t been any births for 18 years and science is at a loss to explain why, East European and African societies disintegrate, and their shrinking populations flee to England and other developed countries. Theo Faron, a former peace campaigner turned bureaucrat in London, teams up with his ex-wife Julian, a revolutionary, to fight for the safety of a lady who has unexpectedly become pregnant in a time of nationalistic violence.

Hacker Memo leads a miserable life in the decayed Mexico of the future. The military invades his residence after learning about his hacking operations. Memo manages to flee to Tijuana, where he meets and falls in love with Luz, a journalist who sells her memories online by having her body connect to the Internet. They enter a cyber-nightmare and find out a devastating reality when Luz accepts a mysterious mission and Memo gets a job at a high-tech factory.

The “Prawns” were a large starship that emerged over Johannesburg, South Africa, in 1982 and carried a bedraggled alien populace. The original warmth of the human population’s reception has diminished 28 years later. The refugee camp where the foreign nationals were house has got degrade into a militarised ghetto named District 9, where they are imprison and exploit in misery. The people will be forcibly remove in 2010 under the direction of operator Wikus van der Merwe through the armaments company Multi-National United. Wikus is expose to an odd alien substance during this operation and is left with only his two new “Prawn” companions for support.

A contest that Caleb Smith, a programmer at a major Internet company, wins entitles him to a week at Nathan Bateman, the brilliant CEO of his company private’s home. When Caleb gets there, he finds that he has get select to participate as the human component in a Turing test to evaluate Ava, a stunning robot capabilities, and consciousness. Ava quickly proves to be far more self-aware and cunning than either guy had anticipated, though.

The powerful Tyrell Corporation is rule by the idealistic scientist Niander Wallace in 2049, and the bioengineered replicants known as Nexus-9 appear to have assimilated into society with ease. LAPD officer “K,” a member of the new generation of Blade Runners, is on a mission to exterminate the outmoded rebellious Nexus models when he discovers a perilous, well-kept secret that has the potential to seriously destabilise the world’s already precarious security. As “K” works to put the puzzle pieces together, he gradually realises that one man—the retire Rick Deckard from Blade Runner (1982), who has either vanish or gone underground—is the key to solving the mystery.