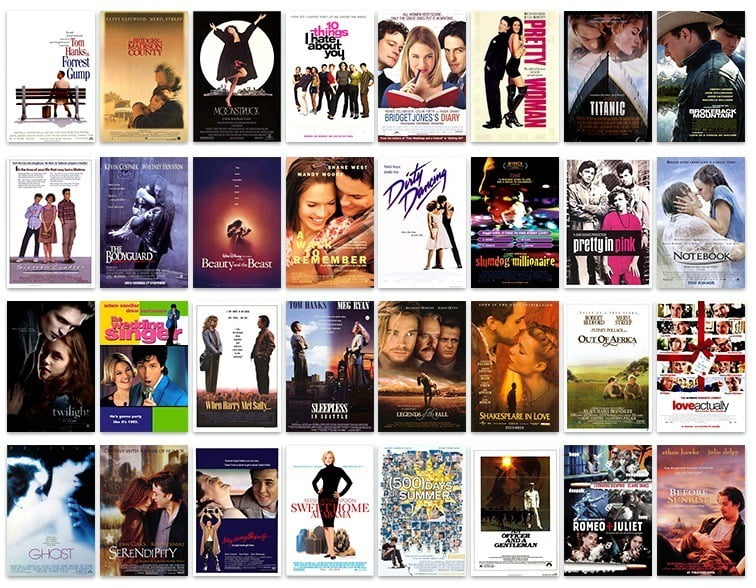 Best Romantic Movies to Watch with Your GirlFriend!

Choosing a film to watch with a girlfriend is the toughest task. The film should have proper romance, filled with emotions so you two can share some memorable moments.

Relax! We got you covered. Here’s your list of movies you can watch with your girlfriend.

500 Days of Summer is a story based on a man who believes in finding soulmates and true love. But he hits the reality that this is not actually the truth.

Tom, a man in his early twenties works in a greeting card company as a writer. He instantly starts liking his new colleague, Summer. Summer appears to have deadened emotion in matters of the heart. Both hit off with a conversation over how they like the music band, Beatles, which makes Tom more attracted towards her. Summer notifies Tom at the start that she just wants to be friends with him. Tom keeps her boundaries while falling hard but Summer’s actions do not match her words. She keeps acting like they are more than friends. They become best of friends but act like lovers.

Summer tells Tom that they should take some time off of each other which breaks the man’s heart. After a while, when both meet, Summer tells Tom that she’s engaged to someone. But Tom hopes in the heart that they will still end up together. Towards the end of the film, Tom meets a new girl at his office, Autumn.

The story is Tom’s journey of being in love. It is unlike any other Hollywood romantic-comedy that follows the formula of “happily ever after”.

2. ETERNAL SUNSHINE OF THE SPOTLESS MIND

Eternal Sunshine of the Spotless Mind is an intake on the assumption of the feeling of satisfaction after removing/forgetting some impactful events from one’s mind. One may forget the memory but can not forget the feeling, emotion, impulse, and instinct of the past.

The film revolves around Joel, an alone and confused man who lives his life every day in the same routine. His life takes a turn when he meets a spontaneous and adventurous girl, Clementine. The two makes a special place in each other’s heart in no time which leads to them falling in love. Following the events in their relationship, they decide to go their separate ways. To this, Clementine decides to remove her tumultuous relationship with Joel, out from her memory. Discovering this news, furious and confused, Joel too contacts the inventor of this process, Dr. Howard Mierzawik to get his memory of him and Clementine removed. It is until he re-experiences their relationship through the process, he realizes his love for her. Now from the deep recession of his brain, Joel is trying to run away from the procedure in order to get back Clementine.

The story is a view of wistful decayed love and relationship. It is an attempt of gaining a second chance from life by getting a clean slate with a shot of redemption.

3. A WALK TO REMEMBER

A Walk To Remember is a tale of an aimless high school man who falls in love his junior and both learn life lessons in their relationship.

Set in North Carolina, it’s 1958. Landon Carter is a high-school senior who bullies their classmates along with his lousy friends. When his prank goes wrong, one time, he is threatened with expulsion. Force to attend the drama club along with other extra-curricular activities, Landon meets shy, kind, and bookish Jamie Sullivan, daughter of a local minister. To escape from any further trouble, Landon uses Jamie for his use and brings her to his house for the practice. Slowly and steadily, Landon starts falling in love with her even after having different outlooks and aims in life. Landon becomes a better version of himself for the girl. But his hope of forever gets threatened after Jamie reveals some truth about her life.

There is nothing new about the film, but yet it seems to stand exception from all other cliche tropes and uncertain scenarios of romantic films. The film is like a phrase in which all romance, sadness, and motivation are included.

It’s nothing like living the final moments of life with your “one and only” even if it comes with some complications and up-and-downs. It is so nice to believe that windows could open one more time before it finally closes.

The story takes place in a nursing home, where Duke reads a romantic story to an old lady who has senile dementia with memory loss. In the late 1930s, Allie Hamilton has come to Seabrook with her family to spend the summer. One night at a carnival, Allie meets Noah Calhoun. Both spend the night together knowing each other and soon fall in love. Allie’s parents discover their relationship but refuse to give approval of being together because of Noah’s class. They take Allie to New York. Noah writes 365 letters to Allie and gets no response. He gives upon them. After years, destiny makes other plans for them.

It is an aching story of the enduring power of love. It tells about the miracle of destiny that happens every day which makes people meet and lose them. But if they really meant to stay, destiny comes around with that too.

People can fall in love in mysterious ways. Sometimes two sufferers find each other in the cruel world who refuse to be a support system.

After spending eight months in Maryland Mental Health Institution, Pat Solanto formulates a theory about the silver lining. Losing his job and witnessing his wife cheating on him in their house bathroom with their wedding song playing in the background makes Pat a furiously tempted man. But getting out of that asylum, he discovers that life is produced by god and he ahs stay physically fit and emotionally supportive which will help him in getting back his wife, Nicki. Pat moves in with his parents and hangs out with his friend. One night of attending dinner at his childhood friend and neighbor, Pat meets tragically widowed and clinically depressed, Tiffany. The girl tells Pat that she can be a liaison between him and his wife if he agrees to be his partner on an upcoming Dance Away Depression Competition.

The story shows the world as twisty yet lovable from Pat’s perspective. It is a touching story about a man living his life with her wife’s betrayal still finding every good reason to be with her again.