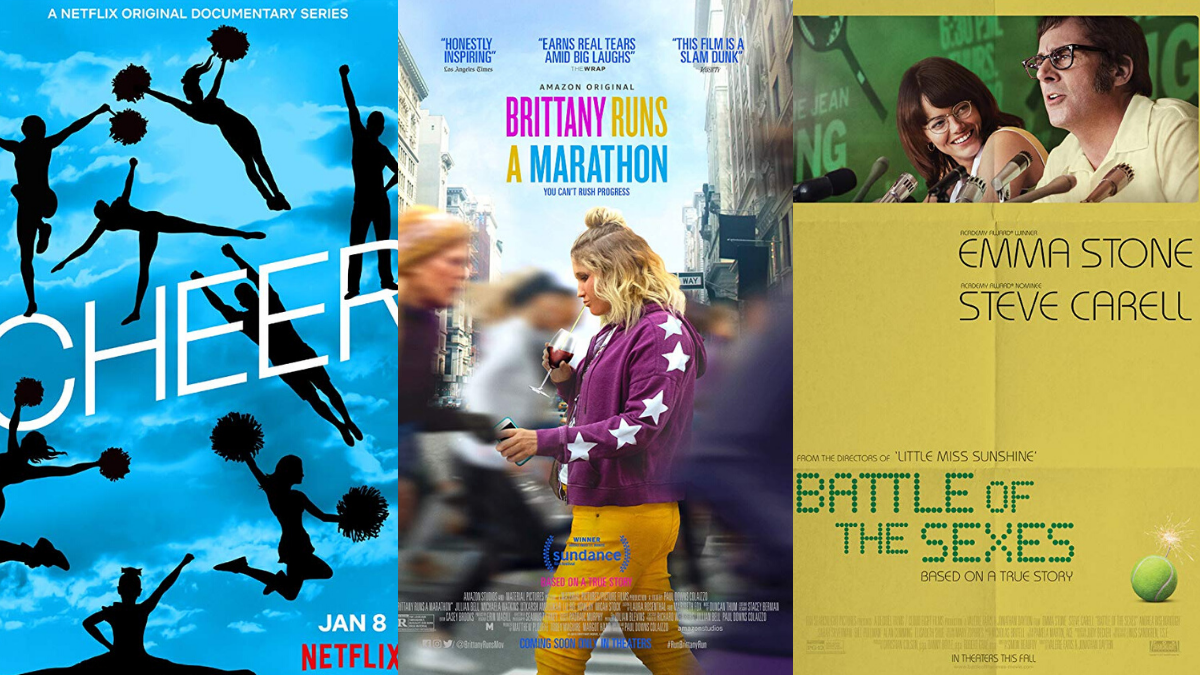 Overall, the sports movie is as stereotypically male-driven as it is cliche. Therefore, when a sports movie with female characters—either individually or as a team—arrives, it’s a welcome change since they provide something unique to the formulaic genre. Here are a few sports movies with strong female leads.

Diana, who is 18 years old, has a chip on her shoulder since she is on the verge of being expelled from high school for fighting, her mother is deceased, her father is irritable, the popular girls in school make her tense, and she is aware that males can be hurtful. She decides she wants to start training after picking up her younger brother from the Brooklyn gym where he boxes to appease his father. Coach Hector admits reluctance to instruct her. Diana’s talent becomes quickly apparent to him, and he encourages her. Adrian, a fellow young fighter with a relationship, is present when she is, but he is intrigued by Diana and finds it difficult to express the actual emotions she has stirred in him. She must reconcile her love for him with her need to be strong and ironically detached.

The Toro cheerleaders from Rancho Carne High School in San Diego have a fantastic routine, a tonne of spirit, and are sure to win the national championship trophy for the sixth consecutive year. Torrance, the newly chosen team captain, learns that the Toros’ carefully planned routines were really stolen from the Clovers, an East Compton hip-hop squad, by the Toro’s prior captain, and that the Toros’ path to undisputed cheerleading glory has taken a dark turn.

Bliss Cavendar, a cute, intelligent, and free-spirited 17-year-old from a small Texas town, is getting ready to take home Mom’s prized Miss Bluebonnet beauty pageant. Bliss will become intrigued by an intriguing flyer for an exciting all-female roller derby in Austin, and as the bold rebel works on her justifications for leading a double life, an amazing and deep transformation will happen. But soon Bliss must make a difficult choice as her new full-contact passion finally catches up to her and two worlds meet.

Chris Cahill, a young sprinter, is struggling to live up to her athletic potential until she meets Tory Skinner, a seasoned track great. As Chris receives training assistance from Tory and her coach, the two ladies first become friends. Tory and Chris gradually develop a sexual relationship and close friendship. When Chris’ progress makes them rivals for a spot on the Olympic team, their relationship becomes more complex.

Football is the only thing in Jess Bhamra’s life that she truly loves. She imagines herself as a successful soccer player, and David Beckham is her idol. As soon as she does, she befriends Juliette Paxton, or Jules to her friends, and she joins a girls’ team led by the fairly attractive Joe. She is a member of a traditional, loving, and close-knit Sikh family. Although Jess’ obsession with sports doesn’t fit into her parents’ ideal of a young woman’s future, her parents just want the best for both of their daughters. When they both develop an ardent interest in Joe, Jess and Jules argue because she doesn’t feel comfortable moving in the shadows. Jess must choose between supporting her family and her friends because her sister’s wedding is the same day as the football championship, where a US College scout will be in attendance to evaluate her performance.

Also Read :  Films Like 'Fresh' That Gives Horror Of Dating

Tonya Harding, a child prodigy whose controlling, violent mother Lavona Golden led her into the world of skating, recalls her turbulent past. She was loved for a brief period of time and then hated for the rest of her days. Tonya has always been a victim of her exceptional talent, from her damaging relationship with her first love, Jeff Gillooly, to her utter defeat in the 1992 Winter Olympics, and from that dishonourable incident with her friend and fellow skater, Nancy Kerrigan, to her final chance at the 1994 Winter Olympics. The first American figure skater to execute the extremely difficult triple axel flawlessly in competition has proven that talent alone is insufficient.

In the movie She’s the Man, Viola Hastings is a young woman who loves soccer. Her school cancels the girls’ soccer programme. She then tries out for the squad made up of men, but they reject her because of her gender. Thus, when Viola learns that her identical twin brother Sebastian is skipping out on Illyria School to go on a music tour in London, Viola figures she can step in and pass for him so she may try out for their soccer programme. She travels to Illyria with the aid of her pals and a makeover, but she quickly discovers that she likes Duke, her roommate. When a lady Duke likes starts dating Sebastian, who is actually Viola in disguise, things get complicated. Things start to unravel when Sebastian returns from London early.

A little girl named Alexis Winston aspires to be the best figure skater in the world. The difficult road of becoming a champion forces her to leave her family behind, which ultimately leads to their breakup. During practise, Alexis has a tragic accident that renders her blind and imperils her dreams. While she is wallowing in self-pity, she discovers herself falling in love with Nick, her boyfriend, all over again. Nick, together with her family, helps her realise that she still has the ability to achieve her goals.

A young opportunist and traveller named Mi Taylor had been given “all the highways in the Kingdom” to roam by his father. He eventually finds the Brown family’s calm country home in England thanks to one of the roads and a note in his father’s journal. The eldest daughter, Velvet, is passionate about horses, and when she wins the courageous steed Pie in a municipal lottery, Mi is inspired to prepare the horse for the Grand National, the biggest horse race in England.

Billie Jean King and Gladys Heldman approach Jack Kramer in 1970 because he has planned a tennis competition where the top award for women is only one-eighth that of the men’s, despite equal ticket sales. Kramer won’t change the terms, citing the inferiority of women’s tennis, despite King and Heldman’s threats to launch their own tour. When the “Original 9” players of what will become the Virginia Slims Circuit, Billie Jean, Julie Heldman, Valerie Ziegenfuss, Judy Dalton, Kristy Pigeon, Peaches Bartkowicz, Kerry Melville Reid, Nancy Richey, and Rosie Casals sign on, Kramer disqualifies them from US Lawn Tennis Association tournaments.