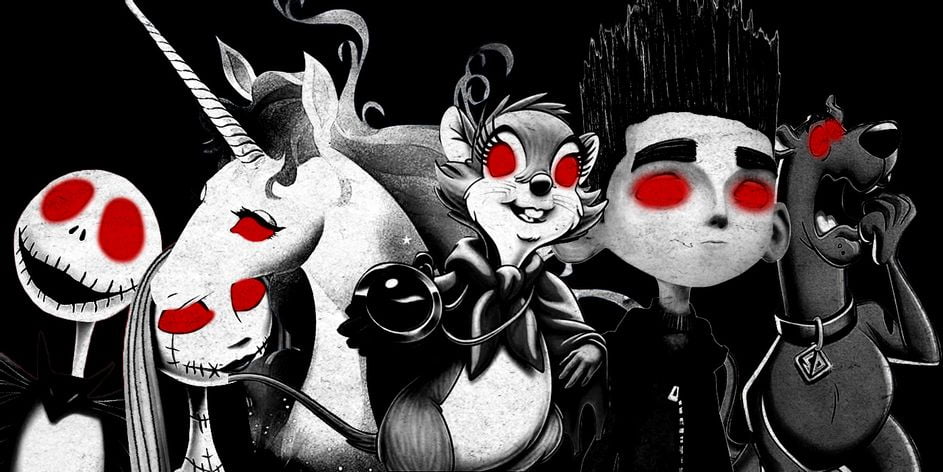 It’s no surprise that animated pictures are the most frequently listed “childhood destroying” films. When it comes to eerie character or environment design, or even story beats, animation has a knack of getting away with things that live action rarely can.
As youngsters get older, these films tend to have an indelible impression on them, moulding their interests and gradually transforming into something less threatening and more sentimental. Even so, there will undoubtedly be some surprises when you see these flicks again. The list below includes animated films that may have frightened you as a child.

Coraline relocates to a new home and finds herself bored and alone. She discovers a bricked-up entrance in the wall that opens up throughout the night. She stumbles onto a planet that appears to be an alternate version of her own. With the exception that everything is better. And everyone has eyes made of buttons. Coraline’s “other mother” encourages her to stay indefinitely if she lets her sew buttons. Coraline realises that this parallel dimension is a ruse to get her to enter. So her Other Mother can “eat up her soul”. She must save her parents from the Other Mother and return home safely, depending on her tricks and, of course, the assistance of a snarky talking cat.

With the help of his trusty friend Itchy, a nervously hyperactive dachshund, Charlie B. Barkin, a rogue German Shepherd with a dark past, escapes from the New Orleans Dog Pound. He then makes his way back to his gambling casino partner Carface Malone, a shady pitbull who is planning a treacherous and potentially lethal double cross. Charlie finds himself confronted with the Heavenly Whippet at the Pearly Gates. Charlie finds a method to return to Earth and reunites with Itchy. He plots his vengeance against Carface and enlists the aid of a little girl named Anne-Marie. Charlie and Anne Marie’s life are on the line after a series of devious plans, close calls, and surprising experiences.

Toaster, Blanky, Radio, Lampy, and Kirby, a vacuum cleaner, are among five sentient domestic gadgets dwelling in an abandoned cottage. Longing to be reunited with their owner, a young guy named Rob, the appliances embark on a perilous journey across the woods, surviving as best they can despite restricted electrical sources. Worse yet, once they get in the big city, they may find that their old appliances are no longer useful due to the introduction of new, modern appliances.

Mrs. Brisby, a fieldmouse, must relocate her family before the farmer ploughs the field where they reside, but her disabled son Timmy is unable to do so owing to sickness. She enlists the help of a group of highly intelligent runaway lab rats who have established an underground community underneath a rose shrub near the farmer’s yard. The rats, led by Nicodemus, resolve to physically assist her in moving her house to return a debt of gratitude to her late husband, who made the rats’ escape from the laboratory possible. However, things get difficult when some of the rats decide to utilise the circumstance to kill Nicodemus while making it appear as though it was an accident.

A unicorn (Mia Farrow) learns through a riddle-speaking butterfly (Robert Klein) that she is the last of her kind, with all the others having been herded away by the Red Bull. The unicorn sets off to find out what the butterfly’s words really mean. Schmendrick (Alan Arkin), a mediocre magician, and Molly Grue (Tammy Grimes), a middle-aged woman who has dreamed of seeing a unicorn her entire life, finally join her on her journey. Their trip takes them far from home, all the way to King Haggard’s castle (Sir Christopher Lee).

Chihiro, ten years old, and her parents are on a family excursion through the countryside when they come discover an amusement park that appears to have been abandoned for years. Despite Chihiro’s warnings about the spooky environment, the parents explore the area and eventually come across an empty diner with fresh food. They are magically transformed into pigs as a result of their betrayal, scaring Chihiro away. She meets the mysterious Haku, who explains that this world is actually a magical bath house, a sort of holiday resort where supernatural beings seek solace away from the earthly realm, and that she must work here to release herself and her parents from the mystical land, as idleness is not permitted.

Fiver, a frightened precognitive rabbit, instigates a mass evacuation in pursuit of a secure new home beneath a small area of land shrouded in tall grass somewhere in a dark warren of the lush English countryside, after sharing his hauntingly realistic visions of devastation with his sibling, Hazel. The trek to greener pastures, however, is both lengthy and perilous, enttangling the brave furry pioneers in an endless stream of surprisingly new and terrible threats, including not only ferocious predators, but also betrayal and man’s formidable weaponry.