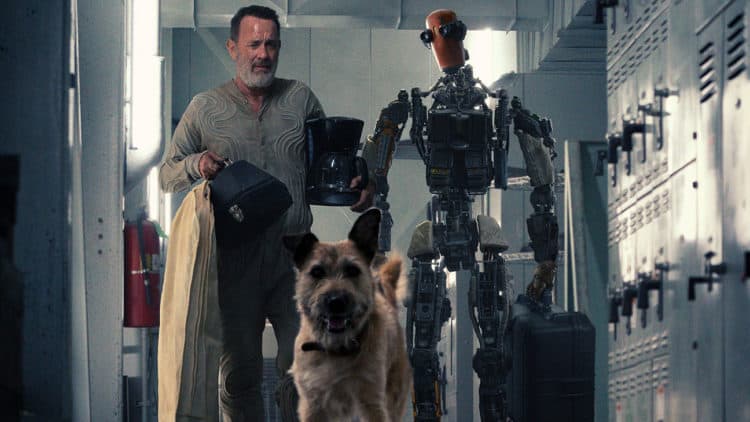 10 Movies like Finch for More Apocalyptic Journeys With Trustful Sidekicks

Finch is a post-apocalyptic film that combines feel-good comedy, science fiction survival, and deep emotional drama. Many people are sceptical if a sequel to Finch will be made after the film’s devastating finish. Finch was initially supposed to end with the robot-dog combo finding humans. However, that scene was deleted from the final cut.
If you’re seeking for more big post-apocalyptic adventures, furry best pals, or robot companions, we’ve put together a list of films like Finch to replace the solar flare-sized hole left in your life by the poignant adventure tale.

Based on a Harlan Ellison fiction, this is a post-apocalyptic tale. As they search for food and sex, a boy and his dog converse telepathically. They come to an underground civilization that has preserved the ancient society. The daughter of one of the community’s leaders seduces and lures him underground, where the residents have lost their ability to reproduce as a result of their long stay underground. They intend to use him for the purpose of impregnation before disposing of him.

Eli, the lone survivor and mysterious carrier of the ultimate prize, is scavenging for food in the carcass of a dystopian post-apocalyptic America, relying on his unique and infallible skills to stay alive and complete his mission of redemption. Only one other man on this blasted earth understands the gravity of Eli’s valuable cargo: the absolute dictator, Carnegie, who will stop at nothing to get his hands on it. This has been Eli’s burden and cause for living for more than three decades; nonetheless, his trek to the west is not yet complete.

Robert Neville, a brilliant virologist and lone survivor, wanders through a barren and scarred post-apocalyptic Manhattan made uninhabitable by a violent genetically modified plague three years after the terrible breakout, still hoping to uncover signs of life. When the sun is shining brightly, the tenacious doctor and his loyal German Shepherd, Samantha, scour the abandoned streets for food, as the cure for the ravenous mutants who were once people remains elusive. However, despite being massively outnumbered and terrified to death, Robert realises that there will come a point when there will be nowhere to hide; at that point, the only live man in New York will have to make his tragic and heroic last stand against the dangerously resourceful foe.

Evelyn Abbott, grieving at the discovery of the supposedly invulnerable creatures’ weakness, finds herself alone, with two young teenagers and a defenceless newborn boy, and no where to hide. Now, 474 days after the all-out alien attack in A Quiet Place (2018), the Abbotts muster every ounce of fortitude they can muster to leave their now-burned-to-the-ground farm and begin on a peril-filled adventure to locate civilization. With this in mind, and a desire to push above the limits, the tenacious survivors have no choice but to walk into eerily calm, inhospitable territory, hoping for a miracle. This time, however, the adversary is everywhere.

Humans flee Earth in the far future because there is too much waste on it. WALL-E lives alone on the planet with a pet cockroach, as he has a propensity of picking up everything he finds intriguing. From lighters to a functional iPod and even a miniature ring box, he has quite a collection (without the ring). He even owns the last live plant on the planet. WALL-E falls in love with EVE, a sleek and deadly probe dropped by a spaceship on Earth in search of a living plant. WALL-E hands her the plant, which sends EVE into a deep slumber. When a spaceship arrives to return EVE, WALL-E joins her.

Also Read :  Everything You Need To Know About Peacemaker

Following that is an experience onboard the Axiom, in which passengers walk around on hovering chairs and consume liquid cuisine through a straw. They’ve grown so obese as a result of their inactivity that they can’t move. Auto, the autopilot, tries to get rid of the plant due to hurriedly provided instructions, forcing WALL-E, EVE, the pilot, and a few malfunctioning robots to discover a method to collect the plant and save the planet.

Cooper, an ex-science engineer and pilot, and his daughter Murph and son Tom are tethered to their farming land in the near future in the American Midwest. As violent sandstorms destroy Earth’s crops, the people of Earth understand that their time here is drawing to an end as food becomes scarce. Because of Cooper’s scientific intellect and skill to pilot aircraft, he is requested to go on a daring trip with a few other scientists through a wormhole after stumbling onto an N.A.S.A. base near his home. Cooper must choose between staying on Earth and risking never seeing his children in order to save the human race by finding another liveable planet while Earth decays.

The Scouts, a robotic squad of mechanised law enforcers created by the benign engineer Deon Wilson, have managed to clean up the streets in a crime-ridden near-future Johannesburg, minimising police officer casualties. When Yo-Landi, Amerika, and Ninja kidnap Deon in the hopes of turning off the powerful droids, they wind up with Scout #22: a wounded robot on the verge of being destroyed. After a few repairs and the installation of new AI software, they now have a metal murderer with the intellect of an infant at their disposal to do their bidding, as long as mama Yo-Landi and papa Ninja show Chappie the ropes and teach him some gangsta manners.

Dodge Petersen, who is alone, sad, and has been dumped by his wife, now has another problem to deal with: a gigantic asteroid would destroy all life on Earth in less than three weeks. Against the backdrop of rising violence and rampant anarchy, Dodge strikes a mutually beneficial deal with his British next-door neighbour, Penny, who is eager to assist him in reconnecting with his old high school flame while she tries to reunite with her family in England. Now, on the verge of Armageddon, two desperate travellers find themselves chasing an illusion in their final days on our planet.

Max Rockatansky, a lone post-apocalyptic survivor, fights to keep one step ahead of the water-controlling tyrant Immortan Joe’s marauding gangs, the Wild Boys, after a close escape in the arid deserts of the dystopian Wasteland. Max, on the other hand, will soon meet one of Joe’s most trusted lieutenants, the fearless warrior Imperator Furiosa, who has just fled the Citadel in her heavily armoured War Rig truck, absconding with an irreplaceable quintet of wives. Now, the mighty ruler and his legion of insane zealots are on the hunt for Max and Furiosa, an unlikely duo.

It’s the end of the world as we know it, and Joel thinks something is missing from his routine new existence after seven years in a subterranean colony after the catastrophic Monsterpocalypse. Then, amazingly, Joel hears his long-lost high-school lover, Aimee, on the radio, and summons the fortitude to journey into the treacherous, creature-infested surface in the name of love. Only 85 miles separate Joel’s happiness and, despite the fact that it sounds impossible, Joel has no choice but to undertake the unthinkable.