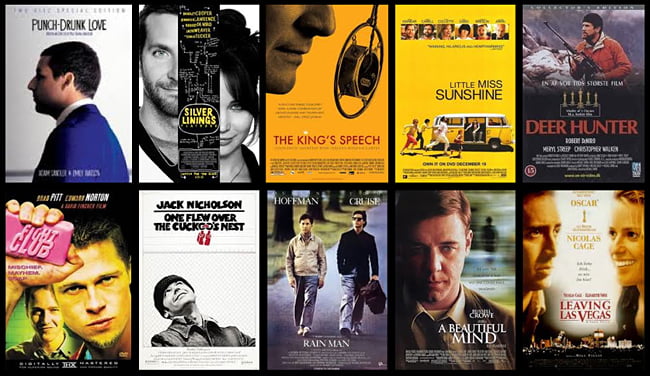 Below are some films which talk about mental illness and addiction.

Pat Solatano has lost everything he owns, including his home, job, and wife. After serving eight months in a state institution as part of a plea bargain, he is now living with his mother and father. Despite the difficult circumstances of their separation, Pat is determined to rebuild his life, stay positive, and reunite with his wife. Things get complex when Pat meets Tiffany, a fascinating girl with her own problems. Tiffany offers to assist Pat in reuniting with his wife. But only if he does something significant for her in exchange. As their bargain comes to a close, they create an unexpected relationship, and silver linings surface in each of their lives.

Susanna Kaysen had a headache in 1967, therefore, she took a bottle of aspirin and followed it up with a bottle of vodka. As a result, this placed her in Claymoore, a psychiatric institution. Dr. Melvin Potts diagnoses her with borderline personality disorder here. Georgina Tuskin, a pathological liar obsessed with The Wizard of Oz; Polly Clark, a childlike schizophrenic; Janet Webber, a sardonic anorexic patient; Daisy Randone, a girl who refuses to let anyone into her room and only eats her father’s chicken; and Lisa Rowe, a sociopath who controls the other patients and makes life difficult for the Claymoore nurses. In the end, Lisa gains and loses control of Susanna throughout the film, and we witness just how awful she can be. Mental health, abuse, self-harm, and suicide are all addressed in this film.

Also Read :  Top 6 Films That Made To Cult Classics!

3. Lars And The Real Girl

Lars Lindstrom is a bashful young man from a small northern town who eventually brings the girl of his dreams home to his brother and sister-in-law. The only problem is that she isn’t real; she is a sex doll that Lars purchased online. Lars, on the other hand, is looking for a deep, lasting relationship, not sex. His sister-in-law is concerned for him, and his brother believes he’s crazy, but the entire village gradually joins in on his delusions in support of this sweet-natured lad they’ve always adored.

John Forbes Nash, Jr. saw it all, from the heights of fame to the depths of vice. He was a mathematical prodigy who, early in his career, produced an amazing discovery and was on the verge of international renown. Nash, who was both attractive and arrogant, quickly found himself on a long and torturous path of self-discovery. He eventually triumphed over his tragedy after many years of battle and got the Nobel Prize late in life.

Also Read :  Money Heist Season 5 Review: The Show Is Back On Track

Rumi, the lead singer of the popular J-Pop group “CHAM!” and teen idol Mima Kirigoe, is encouraged by her manager to leave her bubblegum trio to seek an acting career in the television soap “Double Bind.” Her brave decision, however, does not sit well with the young band’s male fans, particularly an anonymous die-hard fan who begins anonymously posting subtle threats and extremely private facts about Mima’s life on her blog—entries Mima swears aren’t hers. All of the people that persuaded Mima to embrace her “bad girl” reputation have been brutally murdered, and she is being harassed by a scary doppelgänger.

Dr. Alice Howland is a well-known Columbia University linguistics professor. Alice must confront a tragic diagnosis: early-onset Alzheimer’s disease when words begin to slip her and she becomes lost on her daily jogs. Alice’s three grown children must watch helplessly as their mother fades away more and more with each passing day as the once-vibrant woman strives to hold on to her sense of self for as long as possible.

When auto dealer Charlie Babbitt receives word that his estranged father has died, he travels home to Cincinnati, where he learns that he has an autistic older brother named Raymond and that his father’s $3 million inheritance has been bequeathed to the mental institution where Raymond is housed. Charlie checks Raymond out of the facility to accompany him to Los Angeles, motivated by his father’s money. The boys’ cross-country journey transforms both of their lives.

Trevor Reznik is a lathe operator who hasn’t slept in a year due to sleeplessness. As increasingly strange things happen at work and at home, he begins to question his sanity. He tries to uncover what appears to be a strange plot against him while being haunted by a disfigured coworker who no one seems to believe exists and a continuous stream of indecipherable Post-It notes he keeps finding on his fridge. In the process, he entraps two women in his craziness.

Temple Grandin, a renowned animal husbandry expert, visits her aunt Ann’s cattle ranch before enrolling in college and exhibits a mastery of all things mechanical. When courses begin, Grandin, who is autistic, rises to meet the intellectual difficulties, while the social ones are more challenging. Grandin overcomes prejudice to become an animal care innovator and a lifelong advocate for humane slaughtering procedures.

Ellen, often known as Eli, is a 20-year-old woman with anorexia nervosa. When her stepmother and absent father have exhausted all other alternatives, they make an appointment with a highly successful but unconventional doctor. Ellie is placed in a group home with other people who have eating issues once she accepts the therapy. Because she’s surrounded by individuals who are just like her, Ellie is forced to confront the reality of her illness. Will she be able to find herself before it’s too late, or will death arrive sooner than she expects?